Last Tuesday Jo visited us and gave us some eggs. There were eleven eggs that we had to put into the incubator. They came on the 19th day and only two more days to wait until they hatch. Once they hatched we could not touch them at first because they were wet and weird but the next day we could touch them because they were not wet anymore and they had got stronger.

When I held my chick for the first time it felt very soft. There were two boy chicks and nine girl chicks. We had to sit down when we held them and be very careful because if they fell they could break their legs.

Daniel got to have them for the weekend and he fed them and took care of them. He brought them back to class and we had them for another four days. I cried when Jo came to fetch them. 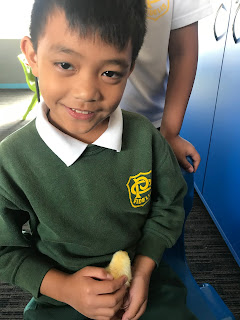